Daphine Polish: What Sorcery Is This? Collection

*Press Samples
Hi everyone, welcome to the start of a new week.  Hopefully you have the day off but if you don't, hopefully your day goes by quickly :)  I want to take a second to thank everyone for the early birthday wishes yesterday.  Today is my actual birthday and I turn the big 27!  It scares me because it's so close to 30 haha!  Thank you for all the sweet comments yesterday.  The nail community continues to amaze me at how sweet and loving everyone is and I couldn't be more thankful for that.

Today I have an amazing collection that is brand new from Daphine Polish.  The collection is called What Sorcery Is This? and it is based off of mythical sorceresses and spirits because of each one's dual or shifting nature.  I love the theme of this collection!  Normally spirits are portrayed as dark and evil, but these polishes reflect the ever changing faces of these mythical women.

To avoid sounding like a broken record, the formula for all of these polishes was great.  These polishes were meant to show some visible nail line or to be worn over white (which I will show at the end) but I found them much more opaque than I thought they would be.  For each polish, I used three thin coats which ended up being fully opaque.  Each formula was fantastic and I did use topcoat for each swatch.


Ceridwen is an enchantress in Welsh medieval folklore. According to legend, Ceridwen had a hideously ugly son who she sought to make wise. She made a boy, Gwion Bach, stir the potion needed to accomplish this task but he accidentally received the gift of wisdom meant for her son. Ceridwen chased him, changing into many forms during the length of the chase, and as a hen devoured him in the form of a piece of corn. Ceridwen became pregnant, and knew that it was Gwion being reborn inside her. She planned to kill him, but he was born so beautiful that she could not bring herself to do so. Many modern Pagans regard her as the Celtic goddess of rebirth, transformation, and inspiration. 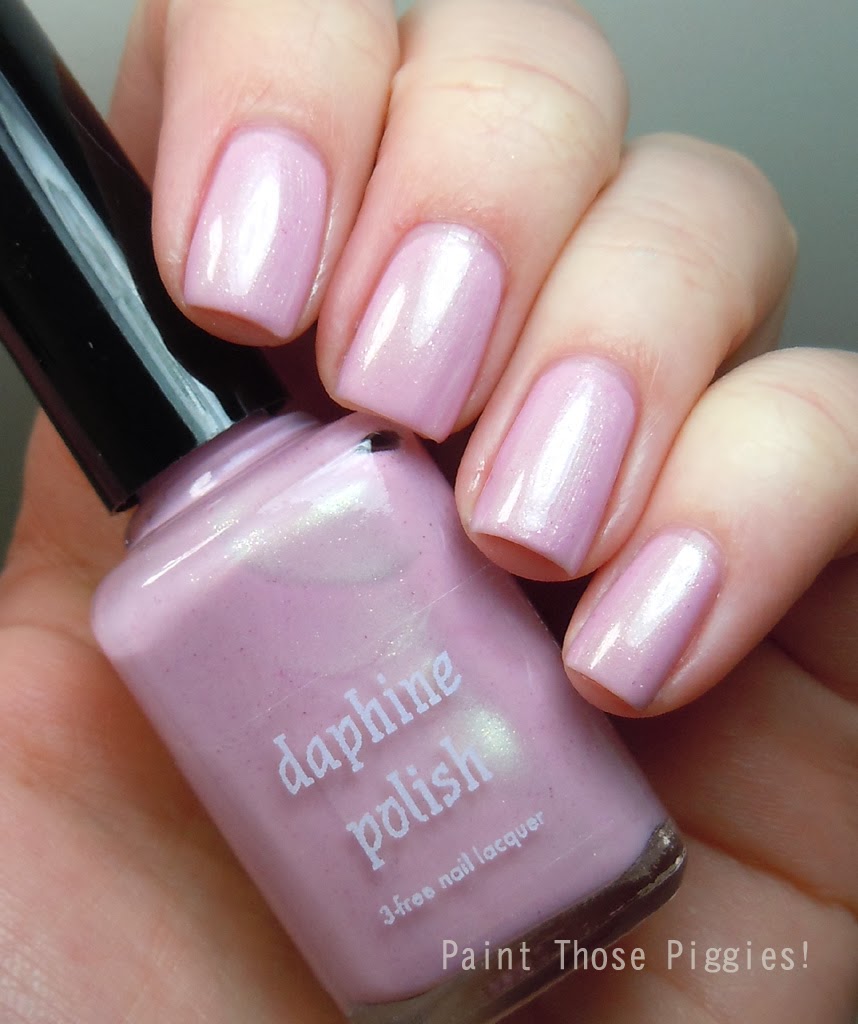 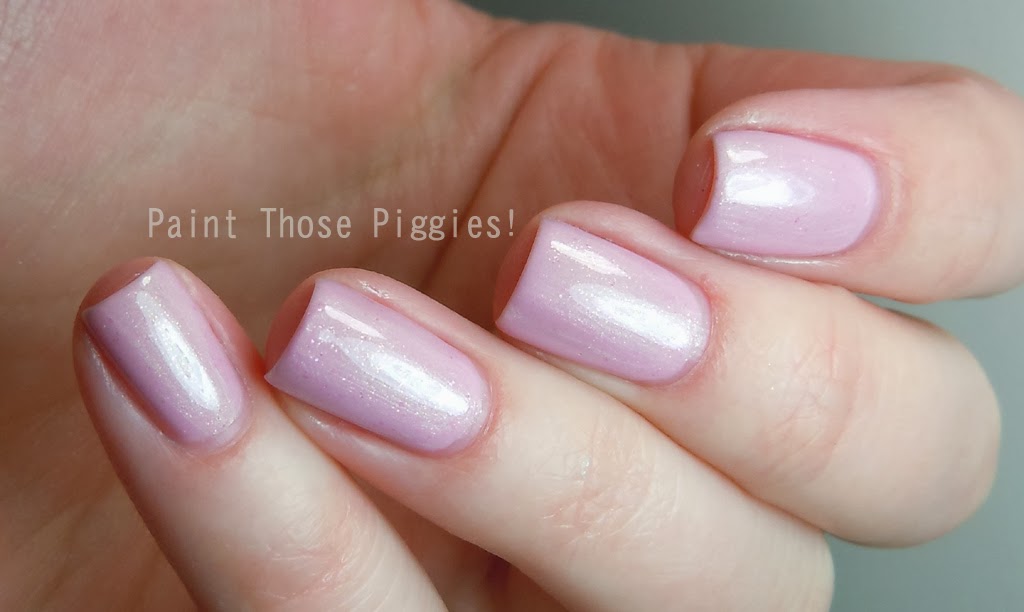 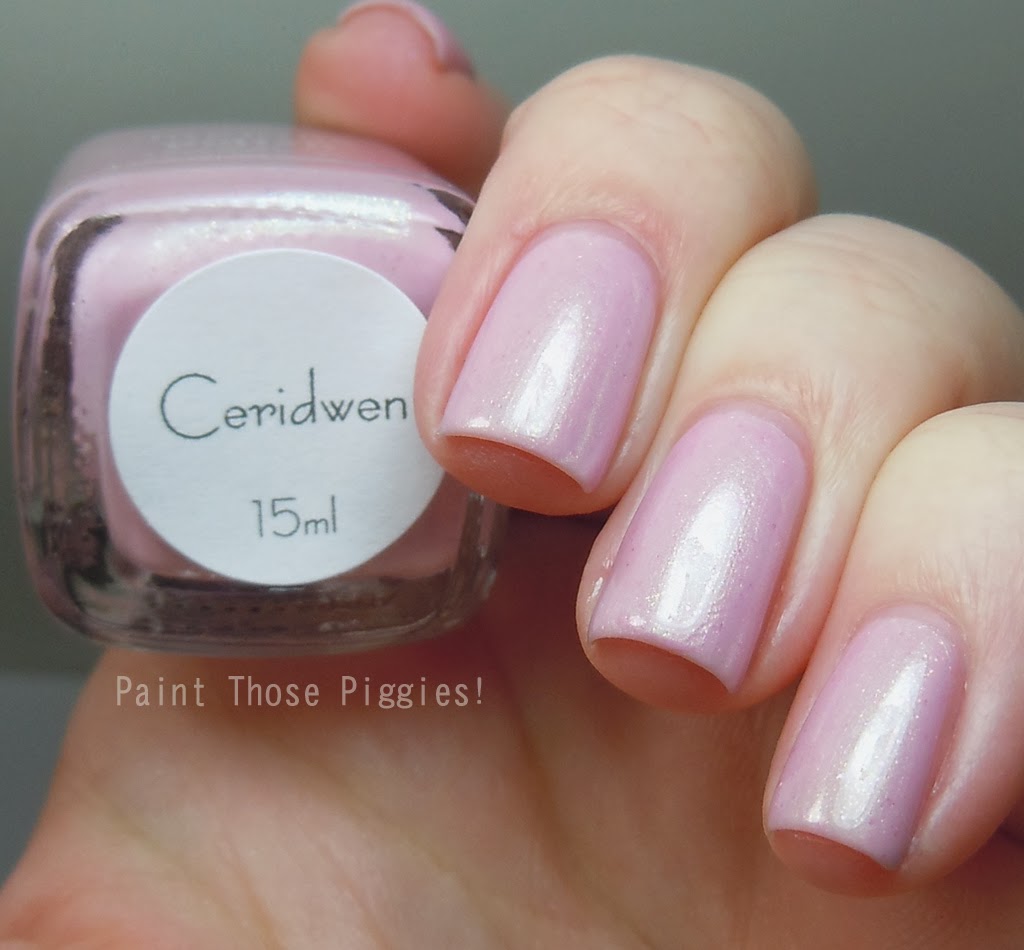 
A gray based polish with strong purple shimmer and silver sparks
Baba Yaga is a witch in Slavic folklore, who is depicted as a as a deformed and ferocious-looking elderly woman. She is associated with the mortar and pestle, She lives deep in the forest and is associated with forest wildlife. She often appears to mortals as an ambiguous character, equally likely to help or hinder those who seek her aid. In old Russian, baba can mean midwife, sorceress, or fortune teller. 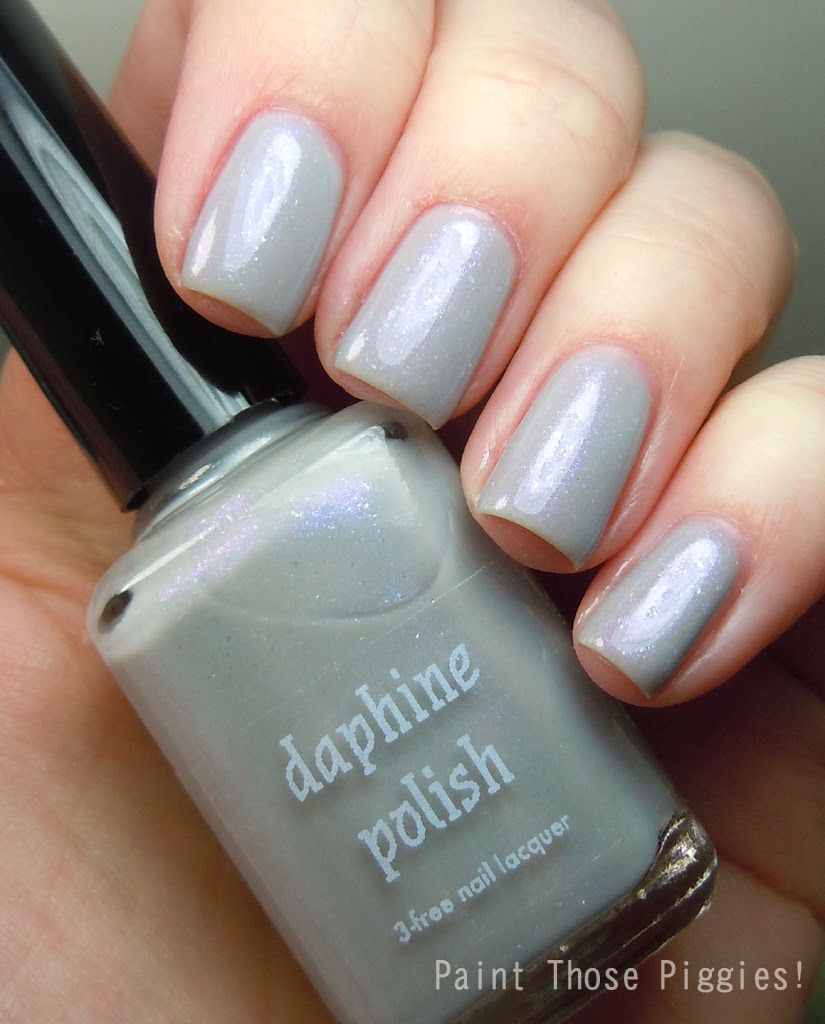 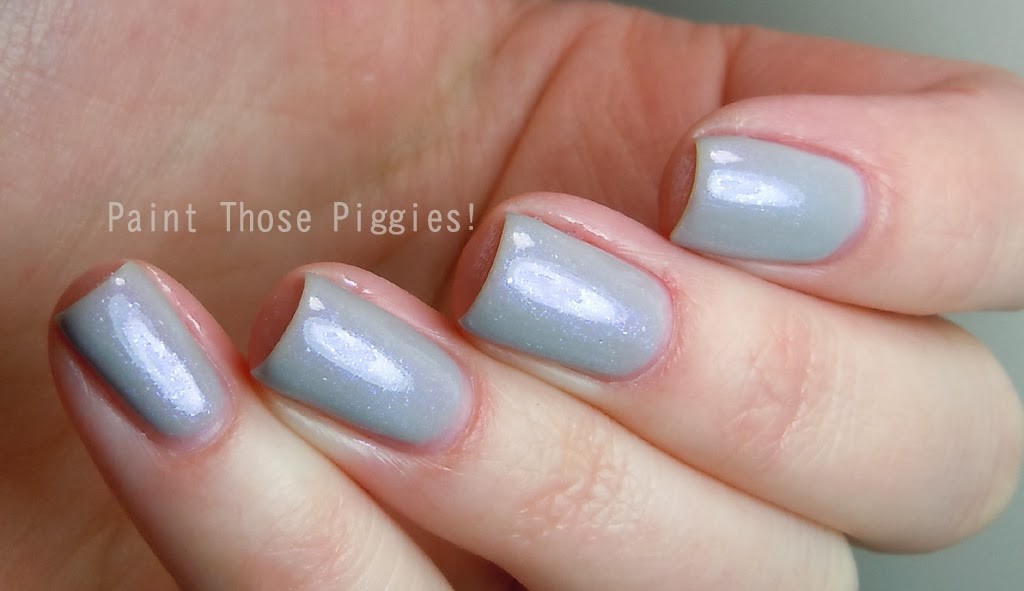 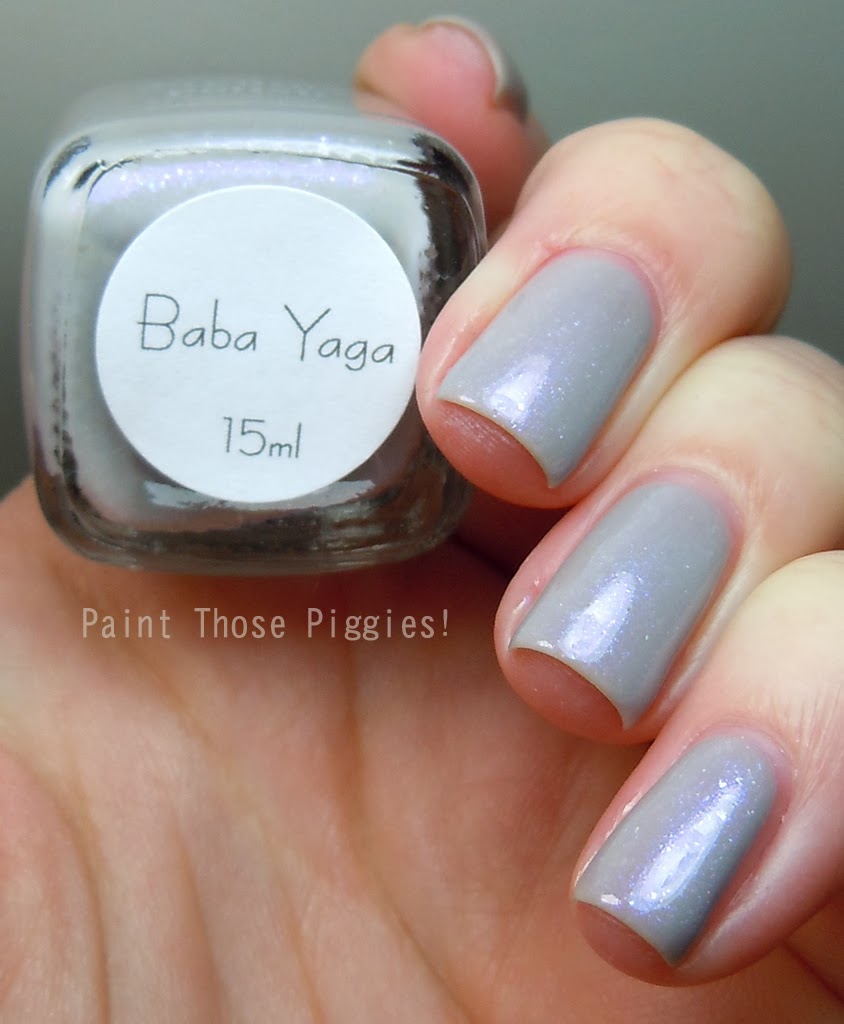 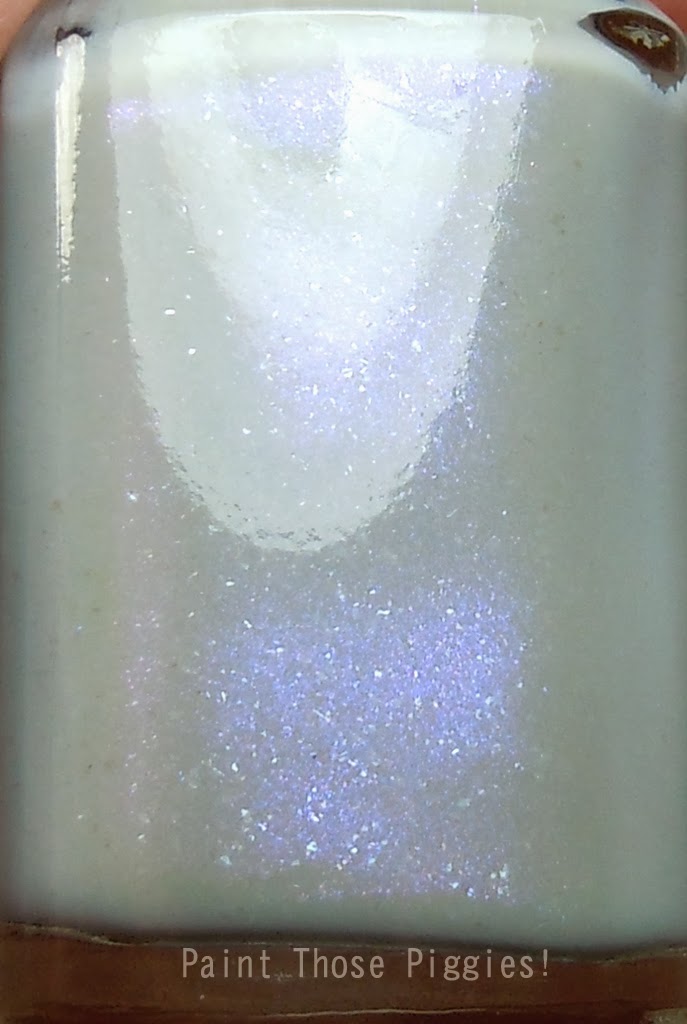 
An ancient Greek goddess, Hecate was variously associated with crossroads, entrance-ways, magic, witchcraft, knowledge of herbs and poisonous plants, necromancy, and sorcery. She was often portrayed in triple form, and was in later writings described as having three heads: dog, serpent, and horse. Shrines to Hecate were set at the entrances to homes and cities which were supposed to protect the people from spirits and the restless dead. Today, Hecate is often the patron goddess of many Wiccans due to her three faces, like the concept of the Maiden, the Mother and the Crone. 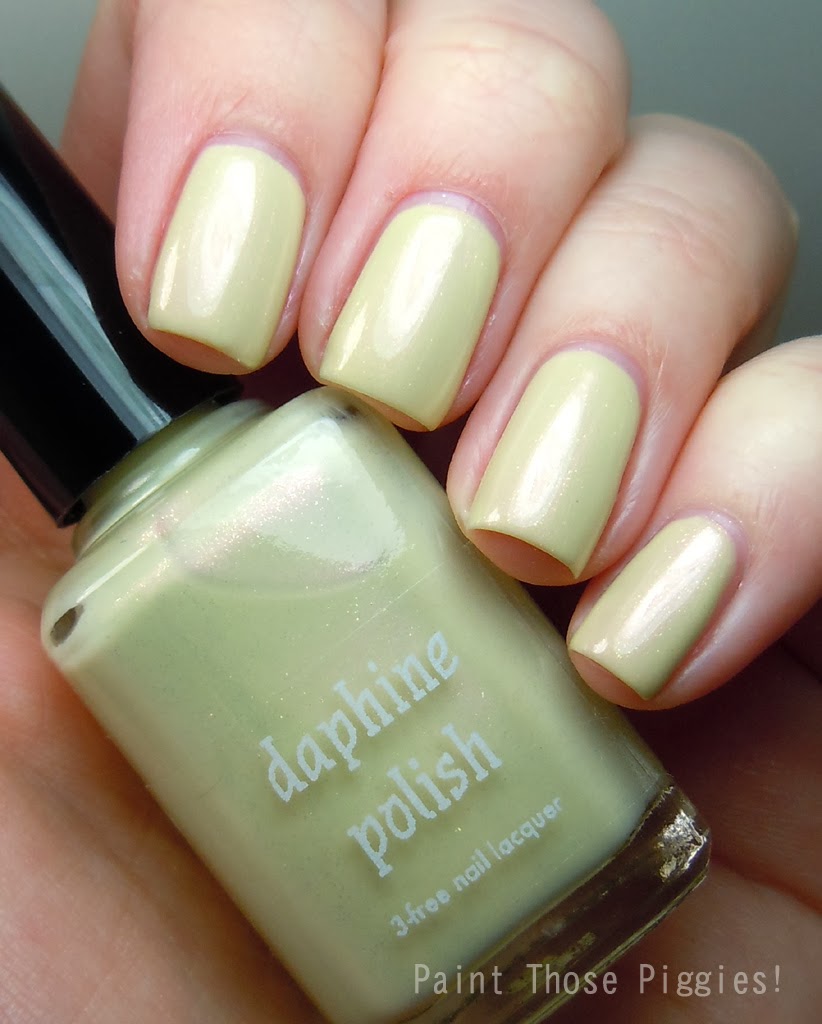 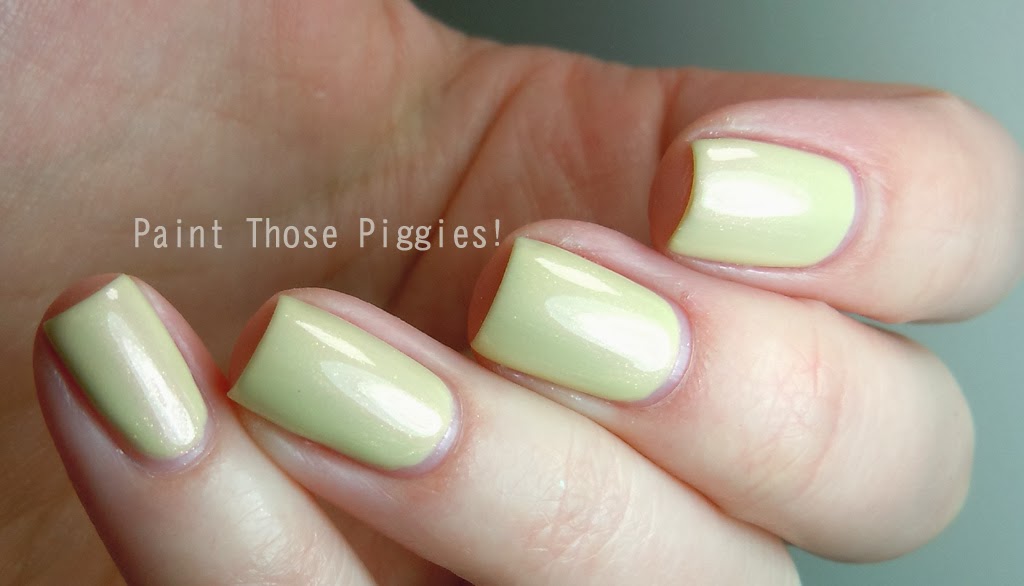 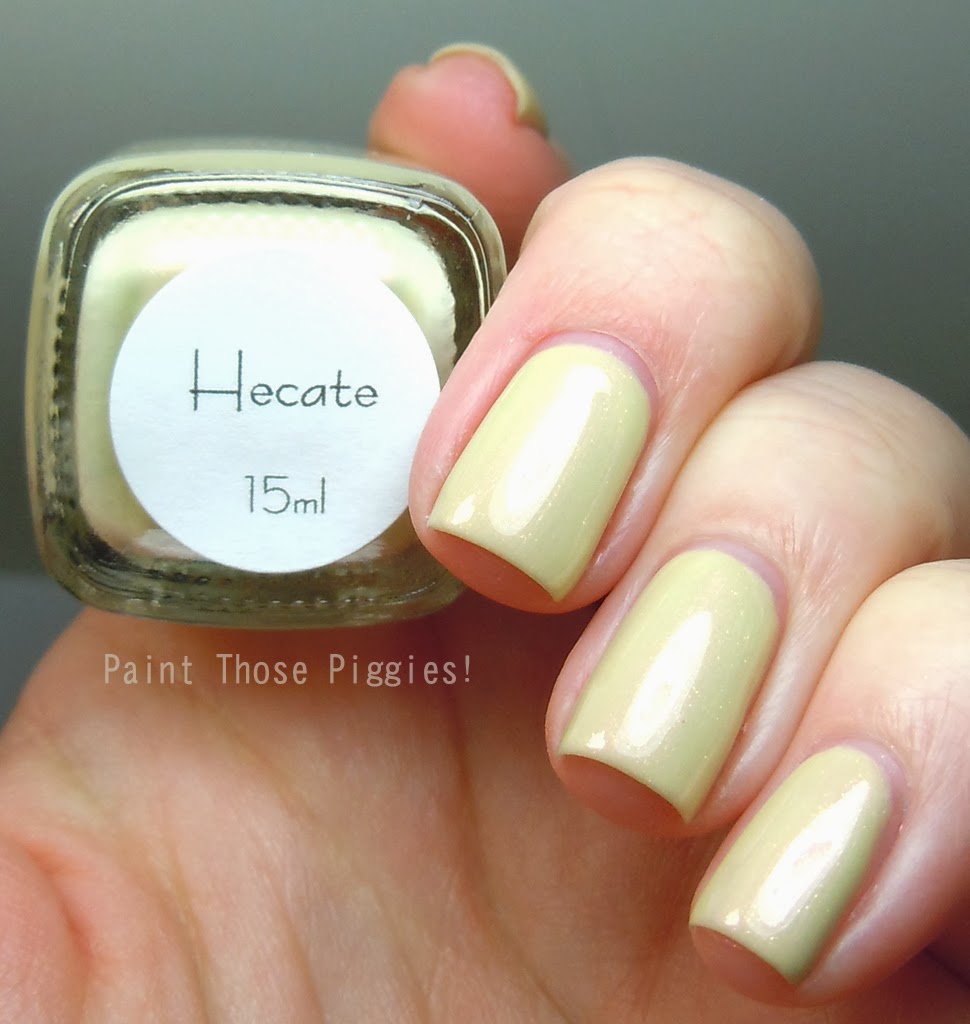 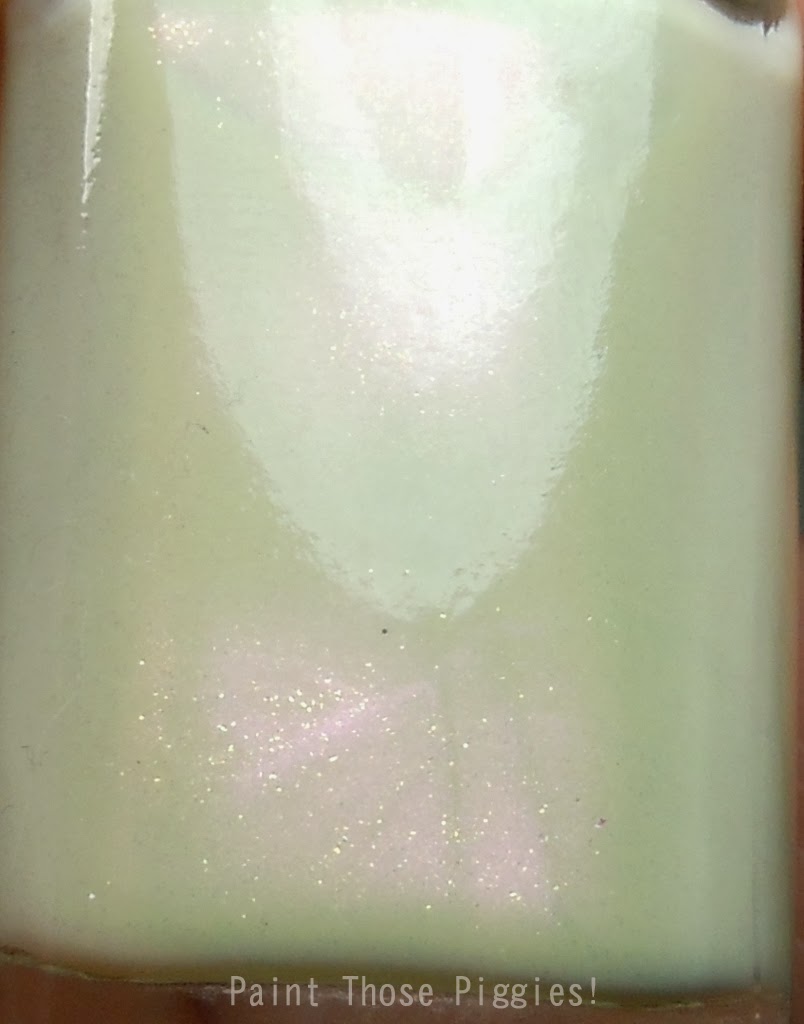 Melusine was a water spirit with the body of a serpent or fish from the waist down, similar to a mermaid. Her legend originated in Poitou and the Low Countries of Europe. The most famous version of the tale says that she was cursed to take the form of a mermaid or serpent from the waist down every Saturday. She married a mortal man, Raymond of Poitou, giving him the condition that he could never enter her chambers on Saturdays. When he broke this promise and saw her in her half serpent form, she fled, never to be seen again. 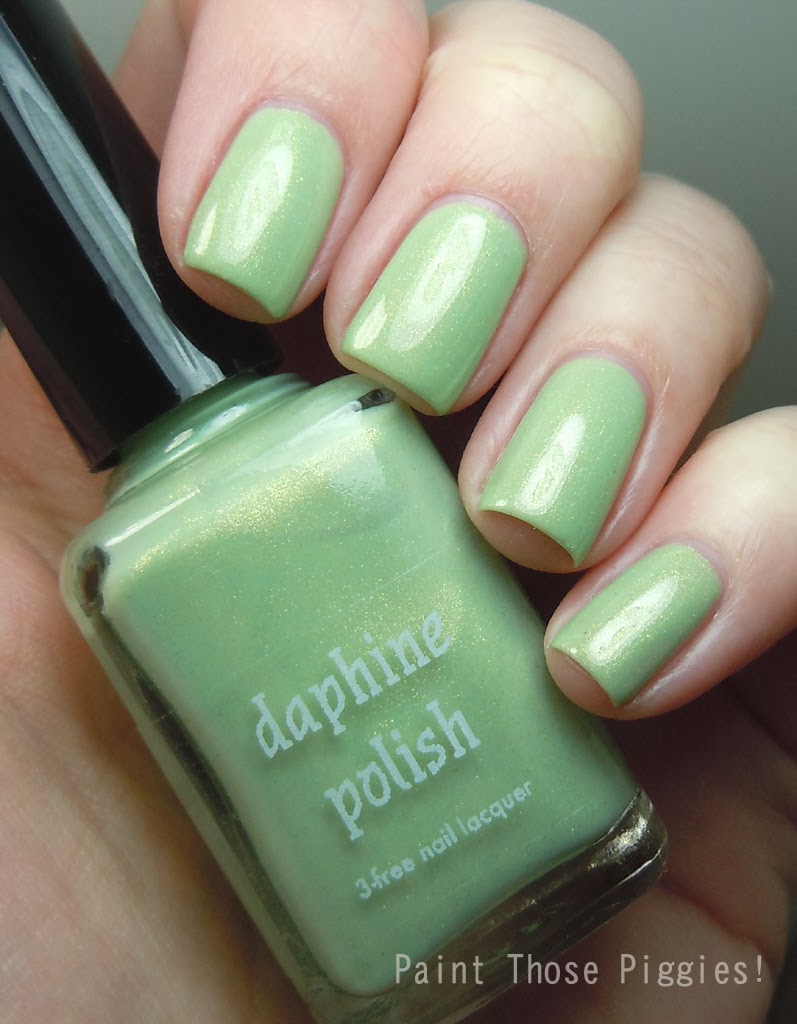 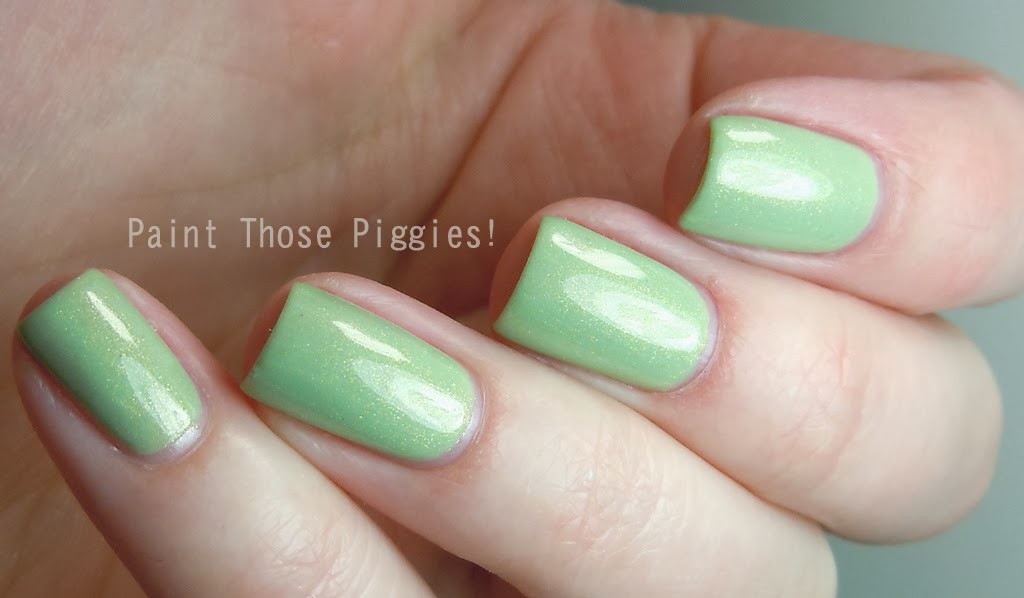 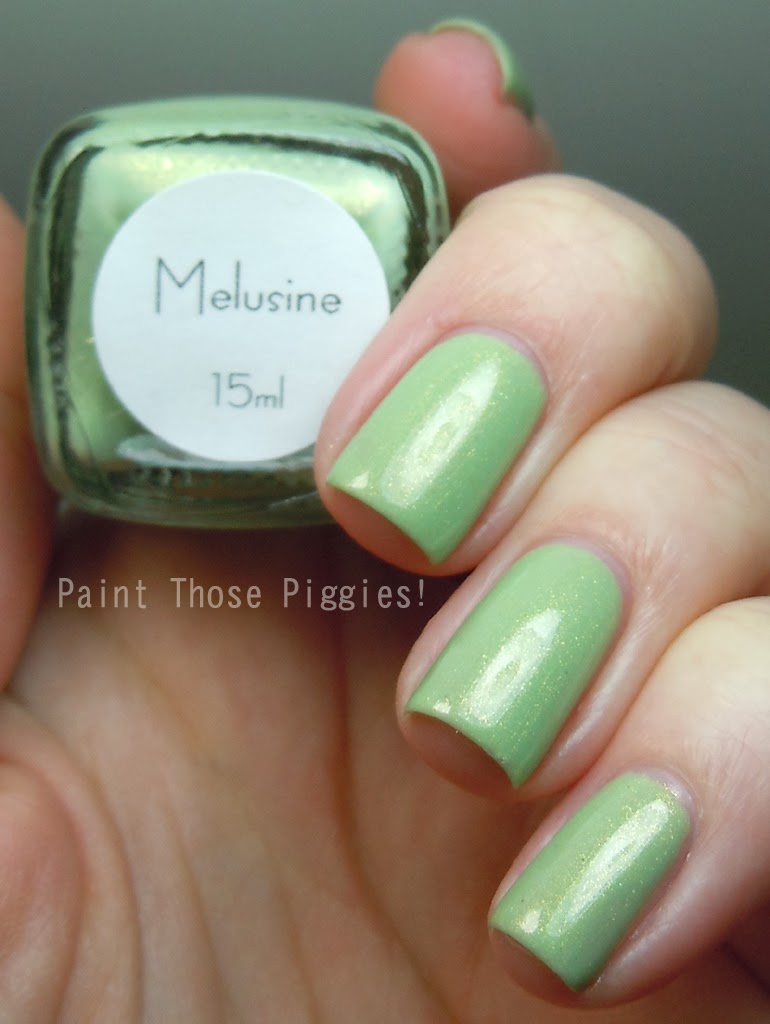 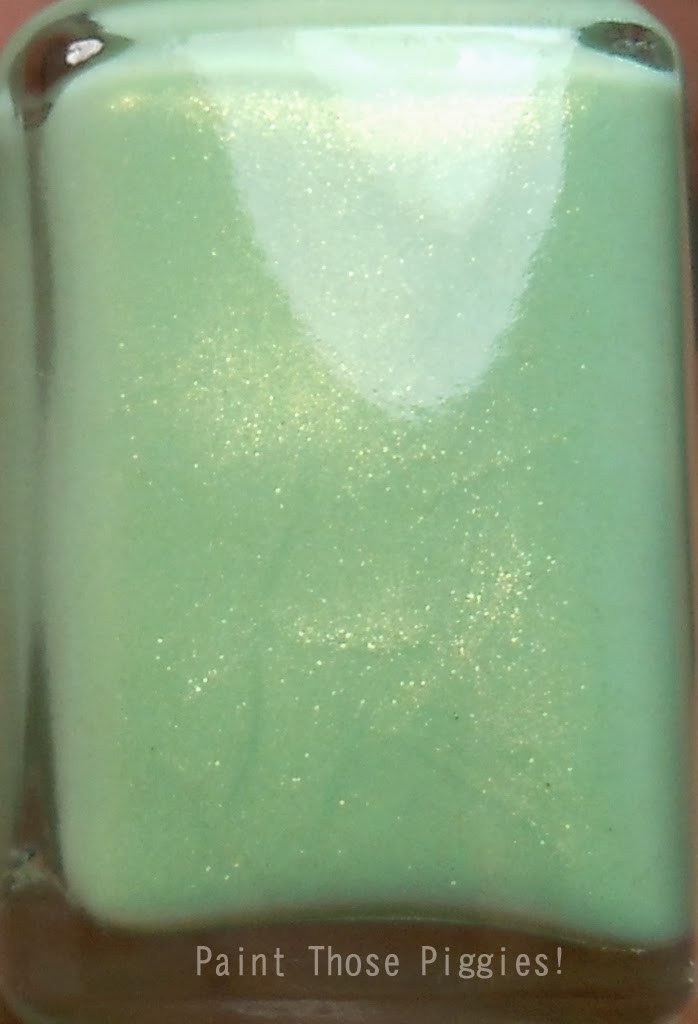 Nimue
A grey-blue polish with blue shimmer and gold sparks


Nimue is also known as the Lady of the Lake in Arthurian legend, specifically named as such in Thomas Malory's Le Morte d'Arthur. In his tale she gives King Arthur his sword Excalibur. She learns her magic from Merlin, whom she later enchants and traps. With Merlin incapacitated, Nimue replaces him as King Arthur's advisor. After Arthur was wounded at the Battle of Carmlann, Nimue is one of the four queens that bear his body to Avalon. 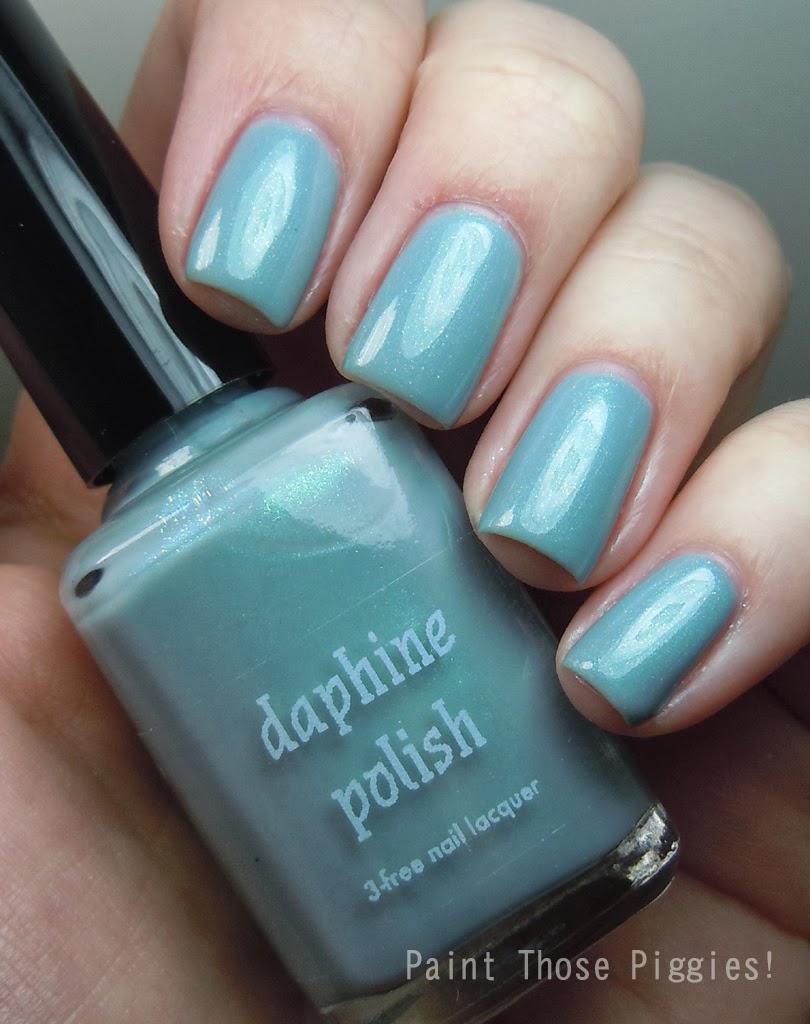 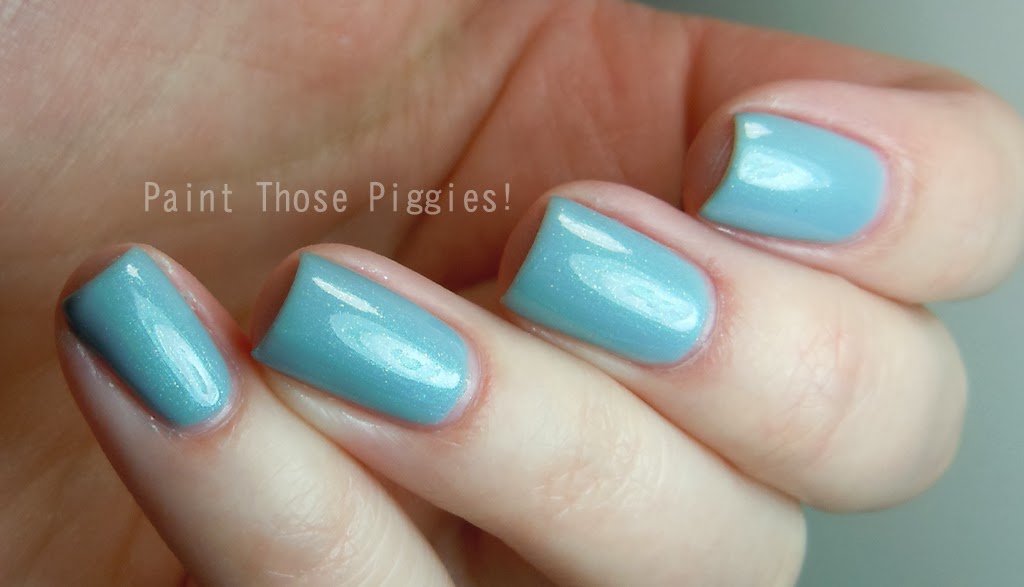 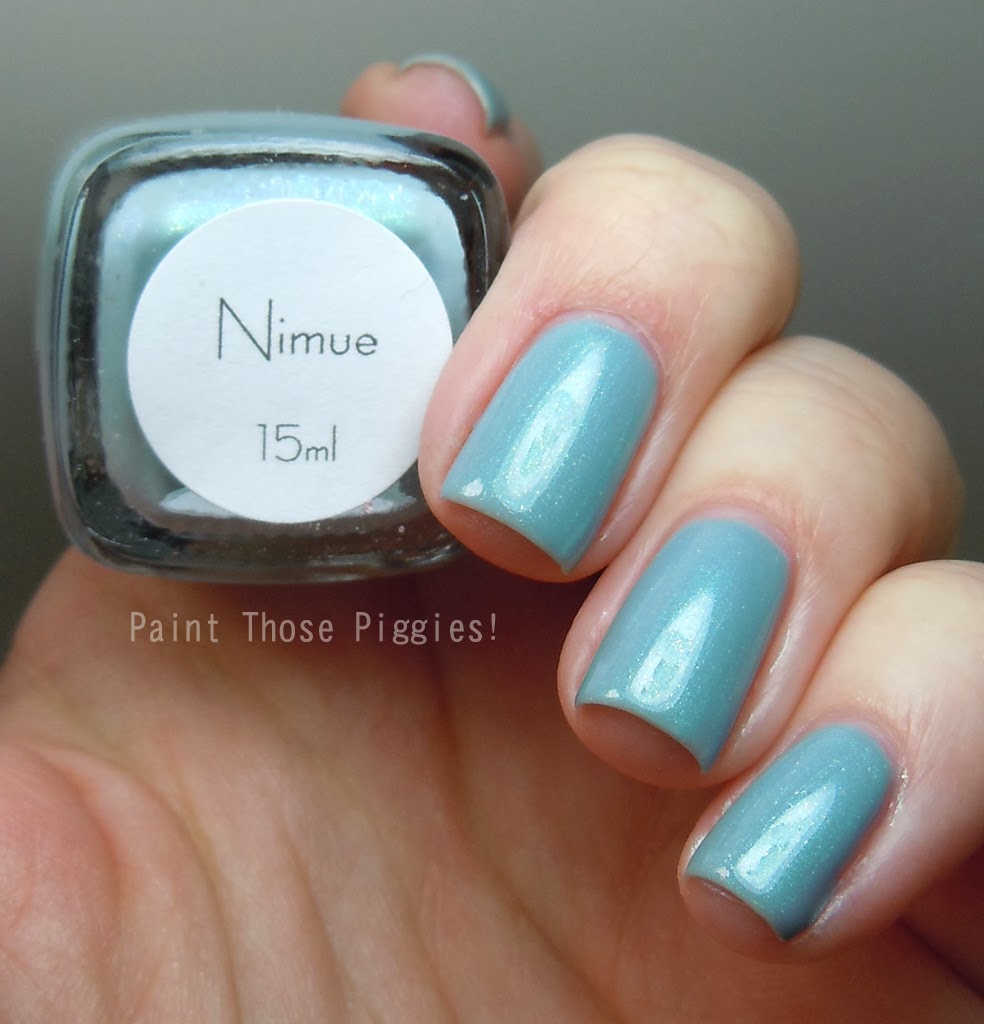 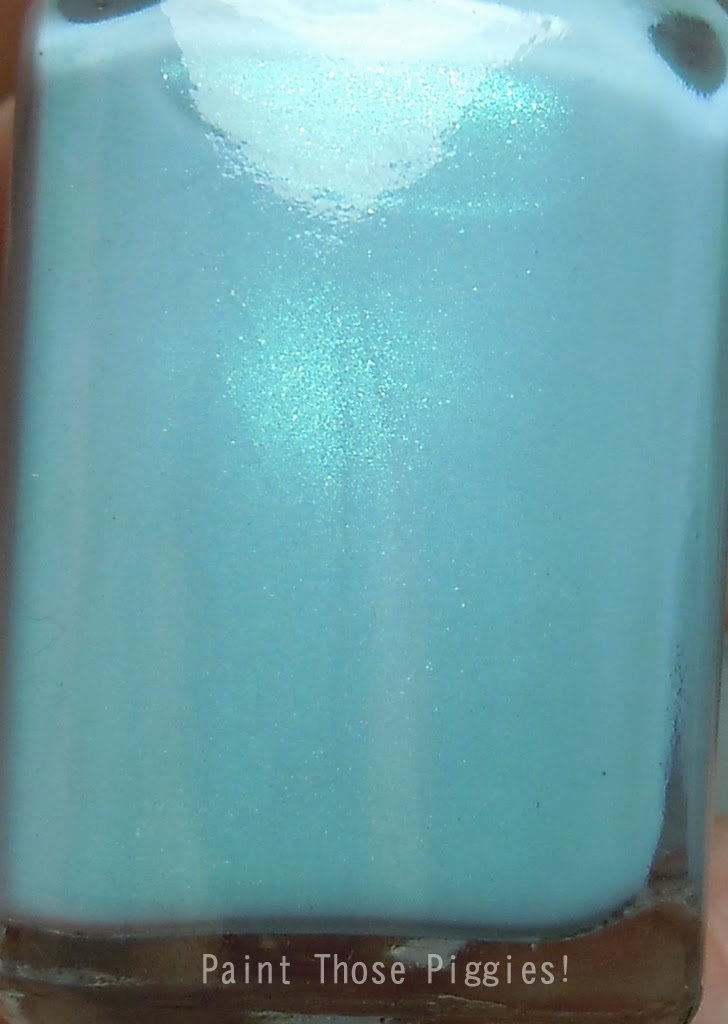 Below is each polish swatched over white.  I used China Glaze White on White and used two coats of each polish with topcoat below.  I didn't think this really made any difference in the look of the polish and I think I preferred them on their own. 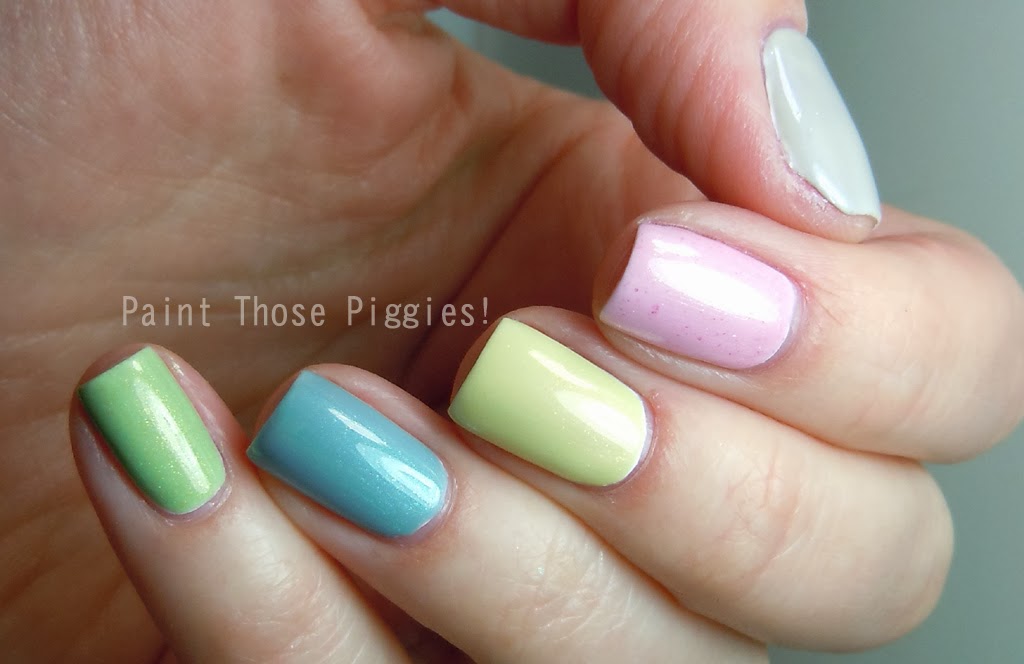 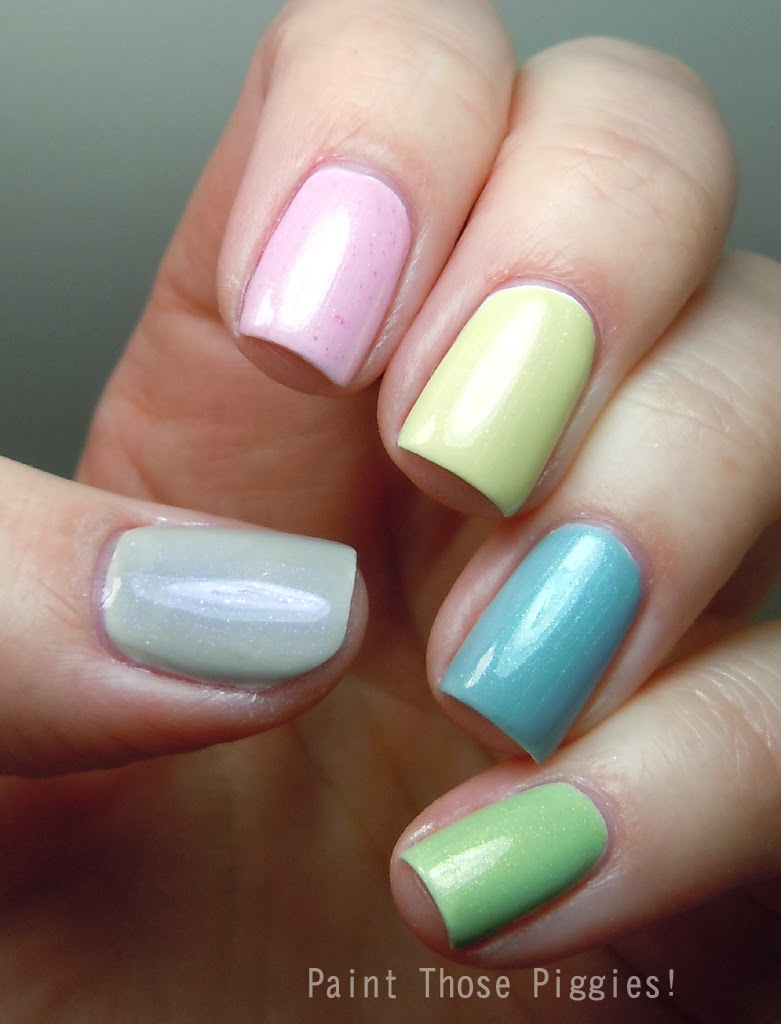 Overall I really loved this collection.   I am a huge fan of pastels and these colors are so pretty and delicate, but each one has a special something to really make it stand out.  Let me know what you think of this collection in comments!

*Polishes in this post were sent to me in exchange for my honest review.
Posted by Paint Those Piggies! at Monday, January 20, 2014